32 Random (And Fun) Facts About Starbucks 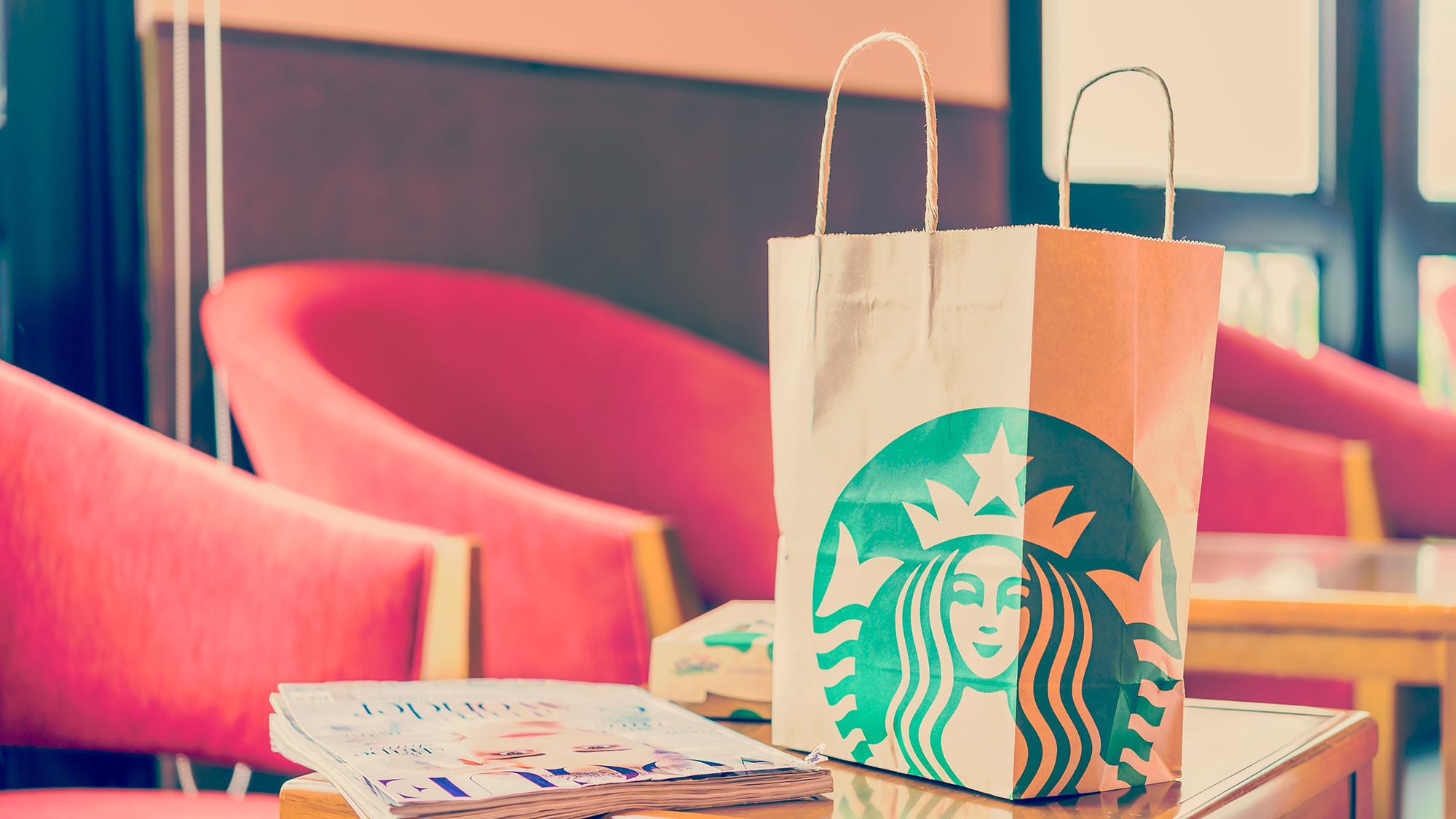 by Chris DavisFebruary 16, 2015
Energizing America, one cup, at a time!

These fun Starbucks facts highlight how pervasive coffee culture has become. Chances are most of you are located within a few blocks of a Starbucks. That is, unless you happen to live in Circle, Montana — the furthest spot from a Starbucks in the continental US — which would mean you’d be 185 miles away from America’s favorite coffee shop.

We wondered what other interesting facts we could find out about Starbucks. After all, millions of us think of the cafe as a home away from home, so it only makes sense that we should know a thing or two about the company behind the java.

So here it is: 32 random (and fun) facts about Starbucks — presented in the eye-popping infographic below.

Starbucks was founded by English teacher Jerry Baldwin, history teacher Zev Siegl, and writer Gordon Bowker. It wasn’t until 1987 that Starbucks was sold to Howard Schultz — the current chairman and CEO of Starbucks.

The price of the most expensive Starbucks drink ever made — a 160-ounce Latte with 99 shots of espresso, and 17 pumps of vanilla syrup, mocha, and matcha powder.

The retirement fund you could potentially have if you invested your money rather than purchasing a daily latte from Starbucks (assuming a $5 drink, not including tip; investment compounded annually at 8% for 50 years).

The number of Starbucks stores, worldwide — 560 of which are located in Sante Fe Springs, CA.

Starbucks now generates over $16 billion in annual revenue, compared to only $300 million for Peet’s Coffee & Tea.

Roy Street Coffee & Tea — located in Seattle — is actually an undercover Starbucks, devoid of any apparent logos, uniforms, or jargon. The store is believed to be used as an experimental hub, where new products can be tested without any brand bias.

One of Starbucks most popular drinks, containing 10 grams of saturated fat and 81 grams of sugar. That’s more than a McDonald’s Big Mac and large Coca-Cola combined.

Requires stores to open 10 minutes earlier — and close 10 minutes later — than the posted time (in an effort to provide better customer service).

The price of one share of stock in Starbucks, after the company went public in 1992. Today, one share is worth $89.

The estimated median lethal dose of caffeine for a 150-pound adult. (i.e. approximately 24 Starbucks Venti coffees). However, Mayo Clinic warns that more than 400 mg of daily caffeine can cause side effects. And just 1 gram (or less) of caffeine can prove fatal for people with underlying health conditions.

Starbucks is named after a character in the novel Moby-Dick — Captain Ahab’s first mate Starbuck.

The founders initially planned on naming the company “Cargo House.” “Pequod” — the name of Ahab’s boat — was also mentioned as a potential brand name.

The number of Starbucks employees. That’s more than three times the population of Greenland.

The number of Starbucks customers served each week in over 65 different countries.

Starbucks offers two additional cup sizes that aren’t listed on the menu, including the 8-ounce “Short” and the 31-ounce “Trenta”. There are also a number of custom drinks that many baristas know by name, including the Cap’n Crunch Berry Frappuccino and the Caramel Snickerdoodle Macchiato.

The Trenta is actually about an ounce larger than the capacity of the average adult’s stomach.

The percentage of Starbucks customers who visit the coffee house at least 16 times per month.

Gallons of milk used by Starbucks each year. Dairy cows need to drink about 400 million gallons of water to produce that much milk.

In 1999, Starbucks published it’s own magazine called Joe. The venture was cancelled after just three issues.

Starbucks’ small circular tables are part of the environmental psychology. They provide a more informal atmosphere so that solo diners don’t feel lonely.

The number of disposable cups used by Starbucks each year.

The CIA headquarters has their own Starbucks store. “Store No. 1” is printed on the receipts, using names and aliases on drinks is prohibited, reward cards are banned, and baristas are not authorized to talk about where they work.

Other intriguing Starbucks locations include a former bank vault, a mosque recreation, the Berlin Wall path, a cruise ship, a train, Navy warships, and even a store made out of four used shipping containers.

The number of different drink combinations offered by Starbucks —taking into account all of the beverages, modifiers, and customization options — according to spokeswoman Lisa Passe.

The creature featured on the Starbucks logo (expressive of the nautical theme from Moby-Dick). The original logo was much more suggestive, featuring a bare-breasted siren with a spread-eagle tail.

The first artist to release an album for Hear Music — a record label launched by Starbucks in 2007, and shut down in 2008.

Starbucks recently announced plans for a nation-wide launch of their evening menu that includes beer, wine, Truffle Popcorn, and Parmesan Crusted Chicken Skewers — among other items. The company is also working on a mobile ordering system, along with a delivery service.

The amount of money Starbucks spends on health care for their employees. That’s more than the company spends on coffee.

In 1996, NPR’s All Things Considered played an April Fools’ Day prank on listeners, telling them Starbucks was developing a billion-dollar pipeline that would carry fresh coffee beans from Seattle to the East Coast. The hoax even included an interview of Starbucks’ CEO.

President Obama Sings Taylor Swift’s Shake It Off
Next

These Dancing Skeletons Want To Change The World
Trending
Heat Index
SORT
32 Random (And Fun) Facts About Starbucks
49520
5 Conceivable Ways To Become A Trillionaire
44440
975 Incredibly Profound Quotes Worth Sharing
18460
16 Reasons Why The Dallas Cowboys Are America’s Team
15770
Zach King Will Blow Your Mind With 6-Second Magic Tricks
8320
Are You A Narcissist?
7640
34 Proven Hacks For Better Sleep Tonight
6090
Toddler With Rare Disorder Becomes Victim Of Cyberbullying
5920